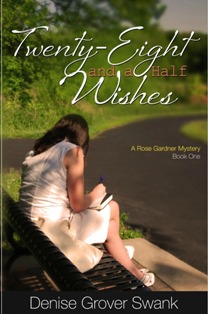 I'm thrilled to be celebrating the debut of a good friend and fantastic author, Denise Grover Swank. Her paranormal mystery, Twenty-Eight and a Half Wishes, released yesterday. Before we meet Denise though here is a bit about her novel:


"It all started when I saw myself dead."
For Rose Gardner, working at the DMV on a Friday afternoon is bad even before she sees a vision of herself dead. She's had plenty of visions, usually boring ones like someone's toilet's overflowed, but she's never seen one of herself before. When her overbearing momma winds up murdered on her sofa instead, two things are certain: There isn't enough hydrogen peroxide in the state of Arkansas to get that stain out, and Rose is the prime suspect. Welcome to the Critique Sisters Corner Denise! Your novel is being described as Medium meets The Bucket List. I love that! Already I want to pick it up based solely on that description. What inspired you to write this novel?
DGS: Last summer, I took my son to the DMV to get license plates for his new car. I stood at the counter, looked around the dingy waiting room, and said "You could get a really interesting story about a woman who works in a DMV." My son rolled his eyes, but the idea was firmly planted. That was a Thursday.

On Saturday, I got a rejection from an agent who read the paranormal thriller I was querying, Chosen. She said she'd loved it but didn't think she could sell it. I let myself wallow in self-pity for one day, then told myself on Sunday it was time to start a new project. All I had was the sequel to the rejected manuscript (which I was in the process of writing) and the DMV idea. I let the DMV idea roll around in my head and by the afternoon I had a VERY short synopsis, kind of like a query letter. A woman who usually sees boring visions sees a vision of herself dead thru a customer at the DMV. She's lived with her overbearing mother for twenty-four years and makes a list of things she wants to do before she dies. It grew from there. It sounds heavy but throw in a quirky southern town, a feisty heroine, a hot guy next door, and an ugly dog and (hopefully) you get a fun summer read.

Twenty-Eight and a Half Wishes is a hybrid: part mystery, part romance, part chick-lit. And I love that. It's the first book in the Rose Gardner Mystery series.

I love that your idea was sparked from a mundane task! While writing what is the one thing you can't do without?

LOL! Wow, five?! Writing a novel with a house full like that had to be tough. What was your favorite part of writing this novel?

DGS: I loved how Rose took control of the story and wouldn't let me go. It was pure magic. The first draft was 102,000 words and I wrote it in 30 days. The story literally fell out of my fingertips. (It's currently at 93K) She was so much fun that it was a total whirlwind.

Also, the story is in first person. I heard Rose's voice in my head as I wrote and I started talking with a southern accent. I'd lived in the south for almost ten years before moving back to the midwest and one of my biggest regrets was that I didn't pick up a southern accent. An added benefit was that I drove my children CRAZY. See? Win/Win. Late August I did a fun vlog with my children and my accent so they could air their complaints. ;)

I'd love to see that video! LOL! Is there anything you can tell us about Twenty-Eight And A Half Wishes that we may not know from your website? Something juicy perhaps?

DGS: Juicy? hmmm... Rose is completely inexperienced with men so her encounters with Joe and her reactions to what she experiences with him were a lot of fun to write. Especially the closer Rose gets to marking off number fifteen: Do more with a man.

Something fun that's not mentioned on my website is a secondary character--a dog named Muffy. Muffy was supposed to be a plot tool and ended up becoming a character all on her own. I've had readers tell me that some of their favorite humorous parts of the book include Muffy. One even told me that Muffy was her favorite literary dog ever.

That sounds like too much fun and now I can hardly wait to meet Muffy! From your website I see that your next novel, Chosen, is releasing this fall. Is it a sequel to Twenty-Eight And A Half Wishes or a stand-alone?

DGS: Chosen is the first book of a paranormal thriller trilogy. Hunted, the second book of the series will be available in late fall. The Chosen series is much darker and edgier the Twenty-Eight and a Half Wishes. I have two sides, a light-hearted funny side and a darker side. I love that I'm able to explore both with my writing.

I'm glad we won't have to wait too long for Chosen, it sounds right up my alley! Exploring is definitely one of the best perks of writing. Any closing thoughts to leave us with?
DGS: Right now I'm working on the second book of the Rose Gardner Mystery series, currently titled Twenty-Nine and a Half Reasons. The story picks up about a month after Twenty-Eight and a Half Wishes. Rose has been called for Fenton County jury duty. Soon after she's been picked, she has a vision in the courthouse men's restroom that the defendant didn't commit the crime. Rose has to figure out what to do with the information while trying to maintain a long distance relationship with Joe, watching her sister begin to question her marriage, and dealing with the five mischievous boys who moved into Joe's old house next door. Oh, and throw in stuffy new assistant district attorney. A typical Rose mess.

I love that there is going to be more than one novel with Rose! Thank you so much for joining us Denise. My copy of Twenty-Eight and a Half Wishes is on it's way and I can hardly wait! To get your own click here.

And here's great news: Denise is giving away one paperback copy of Twenty-Eight and a Half Wishes to one lucky reader of this blog post. Just leave a comment to be entered. The winner will be announced two weeks from today. Good luck, everyone!

~Heather
Posted by Linda Gray at 6:23 AM

Email ThisBlogThis!Share to TwitterShare to FacebookShare to Pinterest
Labels: debut authors, Denise Grover Swank, Twenty-Eight and a Half Wishes