Item One: from Penguin
Penguin is an intriguing publishing company. They seem more 'out there' than the other big publishers,  testing the edges, pushing the envelope, checking out market possibilities that are outside the square old publishing box. Of course, they've done plenty of not-so-enlightened things lately, too (remember the library e-book lending kerfuffle?) But the company does seem to have a history of proactive marketing in some key areas, from the creation of the soft-cover paperback a long time ago, to the following.

Shelf-awareness.com, a great daily literary trade and reader report, published the following article last week about Penguin's new First to Read program, which not only focuses on utilizing social networks to get readers to spread the word about books Penguin publishes, but offers the tantalizing chance for participants not only to get excerpts of upcoming books (Penguin has been doing this a while through email subscriptions), but access to digital galleys. Wow. Zingy.

I don't know about you, but I find this impressive—whether it turns out to be a success or not. Penguin is accessing social media in creative ways, recognizing and utilizing the power the internet has given grass-roots efforts through social media connections.

Item Two: from Amazon
Amazon has started to pay decent advances and provide substantial editing, cover design, and marketing support for some top selections in their Amazon-published titles. And this includes titles that were initially self-published, then picked up by Amazon Publishing.

Between this and Penguin's news, I'm starting to wonder if the shakeout in the publishing industry is finally beginning to find a shape that might work. Wishful thinking probably, but these two developments do seem to have popped out as both pragmatic for readers and writers and clever from a marketing viewpoint. 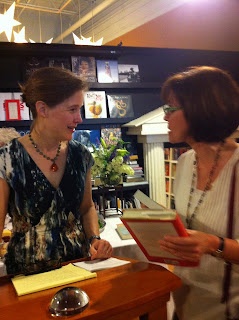 A Problem to Wish For?

I'm still not back home yet, but hoping you'll be entertained by the posts and articles I've come across that I'm sharing with you while I'm gone. The one highlighted here, about the travails of being a wildly popular author who decides to cancel a series, was too good not to bring to you . . .


Do you have your copy of the recently released DEAD EVER AFTER, the last book in the Sookie Stackhouse series? Charlaine Harris, author of the wildly popular vampire series, has called it quits after all these years, and it appears that her fans are not only upset, but many are beyond furious.

It seems like this problem of Ms. Harris's is one we could all wish for: to have sold many millions of copies of our books and had HBO make a hugely successful television series (True Blood) based on them, but then have our fan base be horribly distraught when we finally end the series. But it goes beyond that.

Shortly after DEAD EVER AFTER came out, the Wall Street Journal published this fascinating article on the series and what Ms. Harris is facing from her angry fans.

Personally, I believe deep down that an author should be able to end a series when she or he needs to without being threatened or called awful names by fans, but I do know there's a greedy little part of my heart that is very glad that Arthur Conan Doyle caved to fan pressure and brought Sherlock Holmes back to life after Doyle had tired of the series and killed Holmes off in a battle to the death with his arch enemy Professor Moriarty. (I'm a bigtime mystery fan, but not so much one of vampires—mainly because they scare the bejeezus out of me—so I haven't gotten hooked on Sookie Stackhouse. But I can relate.)

How Do Agents Read Your First Pages?

"The most successful openings are the ones that suck me in and make me quickly forget that I'm reading something. These are stories that get me involved in the character and welcome me with a voice I'll want to spend lots of time with."

That is part of how Agent Marie Lamba (Jennifer de Chiara Literary Agency) answered a great question from Jan at the Adventures n YA & Children's Publishing blog some weeks ago. Her answer and the answers of eleven other agents are featured in the post. The question:

"What is different about the way you read the first pages of a manuscript as an agent versus how you would read them as a reader or critique partner?"

If YA or children's writing is a major interest for you, you may have seen this blog post already. But even though the agents all do focus in those categories, their responses are appropriate for pretty much all writing, I think.

So, in a continuation of bringing you great blog posts from others while I'm away wandering and exploring other lands, here is the link to Agent Roundup: Reading As An Agent.
Posted by Linda Gray at 12:00 AM 6 comments: